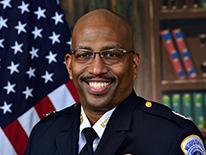 Assistant Chief Andre Wright began his career with the Metropolitan Police Department in 1994. After graduating from the Academy, he was assigned as an Officer in the Sixth District. He eventually was promoted to Investigator and assigned to the Major Narcotics Division and was one of seven investigators assigned to the Citywide Gun Recovery Unit within the Narcotics and Special Investigations Division. He was then assigned to the Violent Crimes section where he closed numerous cases.

Assistant Chief Wright's first post as Commander was heading up the Youth and Family Services Division within the Metropolitan Police Department. The Youth and Family Services Division is the division responsible for investigating child abuse and neglect, child sexual abuse and exploitation (including child pornography and prostitution), juvenile missing persons and parental kidnapping, and persons in need of supervision. He was later assigned to the Seventh District, which includes much of the Southeast quadrant of the city, including the neighborhoods of Anacostia, Barry Farm, Naylor Gardens and Washington Highlands.