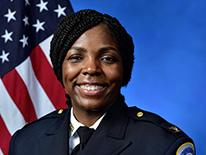 Commander Tasha Bryant began her career with the Metropolitan Police Department in March 2004 as a patrol officer in the Fourth Police District. While there, she received the Patrol Service Area of the Year Award twice (2006, 2009) and Community Officer of the Year award in 2008. In April 2009, Bryant was assigned to the CSID Forensic Science Division as a Crime Scene Officer.

Bryant was promoted to sergeant in April 2014 and served in both the Fifth and Seventh Police Districts. Then, in April 2018, Bryant was promoted to the rank of lieutenant and assigned to the First Police District. Later that same year, she moved to the School Safety Division, where she coordinated school safety activities in a regional operational command, including supervision of all sergeants and resource officers in the region.

When Commander Bryant was promoted to captain, she moved to the Seventh Police District. There, she assisted the District Commander with patrol operations in the Seventh District. As 7D captain, Bryant also served as liaison with the United States Attorney's Office, advocacy groups, and other government and non-governmental agencies.

In May 2021, Bryant was promoted to inspector and assigned to the First District Substation (1D-1). In addition to managing the substation, Bryant supported the captains assigned to the 2021 Summer Crime Prevention Initiative (SCPI). This experience gave her an opportunity to reconnect and develop new relationships in some of the most vulnerable communities in the First District.

Commander Tasha Bryant has an Associate Degree in communication from Strayer University. She completed the Federal Bureau Investigation (FBI) Innovative Technology course and she will begin the Senior Management Institute of Policing (SMIP) in Boston, MA in July 2022. She is currently taking courses at University of Maryland in pursuit of her Bachelor’s Degree.