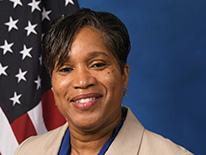 Prior to joining the Metropolitan Police Department in May 2022, Ms. Smith served as a United States Park Police officer for 24 years. She began her law enforcement career in 1998, serving in field offices across the country (New York, San Francisco, Georgia, and Washington, DC). She was promoted to Sergeant in 2009 and continued to move up the ranks until being appointed to the position of Chief of Police, US Park Police in February 2021.

Pamela A. Smith holds a Bachelor’s Degree in Education from the University of Arkansas at Pine Bluff and a Graduate Certificate in Criminal Justice Education from the University of Virginia. She is also a graduate of the FBI National Academy (Session 265). Throughout her distinguished career, Ms. Smith has earned numerous awards and recognitions, among them, the Women in Federal law Enforcement Public Service Award, Northeast Region Equal Employment Opportunity Office Recognition of Outstanding Excellence; and the National Council of Negro Women Award for Working Together in Unity.