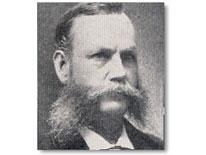 Major Thomas P. Morgan was born in 1821 in the town of Alexandria (Virginia) when Alexandria was part of the District of Columbia.  He moved in with his uncle who resided in Montgomery County, Maryland, where he attended school in the winter, but worked on his uncle’s farm during the summer months.

He was active in several religious groups and was on the board of School trustees, helping manage steamboat companies across the country. During the Civil War, Morgan -- who had a hand in shipping -- was placed in charge of transportation of water.

In 1873 he was placed on the Board of Fire Commissioners, where he remained until February 2, 1878, at which time he was selected to replace Major A.C. Richards and the now defunct Police Board of Commissioners, which had been dissolved by President Grant.

During his brief tenure as Chief of Police, Morgan oversaw the addition of an ambulance service maintained by the police department, and saw that a retirement provision was made for the older policemen who had served for many years, but were no longer physically capable of performing their duties.

Major Morgan was quickly made District Commissioner, less than two years after being appointed to the police department. He resigned as Superintendent on November 29, 1879, and took over the office of Commissioner. He then retired from public life and returned to his businesses.