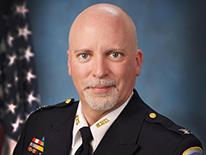 John Haines currently serves as the commander of the Criminal Investigations Division (CID) where he oversees investigative units such as the homicide unit, sexual assault unit, and the district detective units.

Upon graduating from the Metropolitan Police Academy in 2000, Commander Haines was assigned to the First District as a patrol officer where he served for five years. In 2005, he became a crime scene technician within the Forensic Division and was later promoted to sergeant in 2005, where he served as a first line shift supervisor in the Fifth District. He also served as a supervisor for a Tactical Team, supervising a team of highly motivated officers that were tasked with targeting violent crime suspects within in the Fifth District.

In 2008, Commander Haines was promoted to detective sergeant within the Narcotics and Special Investigations Division, detailed as a supervisor to the Federal Task Force in the Drug Enforcement Administration (DEA) Mobile Enforcement Team. In 2009, Commander Haines was promoted to lieutenant in the Fourth District where he was responsible for all personnel, crime, crime trends, crime strategies, and administrative matters that pertained to Patrol Service Area 401. Commander Haines also served as a special mission lieutenant supervising the Fourth District’s Vice Unit, Auto Theft Unit, and the Suppression Unit.

Commander Haines is a 2012 graduate of the FBI National Academy, session 250.