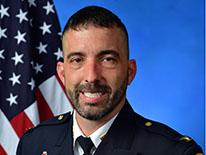 Carlos Heraud was promoted to commander of the Fourth District in December 2021. Prior to his promotion, Heraud served as captain of the Homicide Branch in the Investigative Services Bureau.

Carlos Heraud joined the Metropolitan Police Department in 2003. After graduating from the Academy, he was assigned to the Fifth District as a patrol officer. In 2012, Carlos Heraud was promoted to the rank of sergeant and assigned to the Third District. While at the Third District, Heraud supervised two of the city’s nightlife units that were responsible for the safety of residents and visitors to the 18th Street and U Street Corridors.

In April 2016, Heraud was promoted to the rank of lieutenant and assigned back to the Fifth District where he served as the Patrol Service Area (PSA) manager for PSA 507. In 2016, this PSA saw a 16 percent reduction in overall crime and a seven percent decrease in violent crime, which resulted in PSA 507 receiving the PSA of the Year Award under Heraud’s leadership.

In 2017, Carlos Heraud was assigned to the Fifth District Detectives Office, where he managed a team of detectives who investigated many of the crimes that occurred in the Fifth District. In April 2018, Heraud was promoted to the rank of captain and was assigned to the Seventh District. In addition to being a manager in the Seventh District, Heraud also managed one of the six Summer Crime Prevention Initiative Areas in both 2018 and 2019.

Carlos Heraud enlisted in the United States Marine Corps immediately following high school. He proudly served his country from 1997-2002 and was honorably discharged in 2002 at the rank of sergeant.