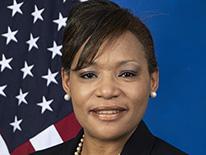 Ms. Crenshaw began her career at the Metropolitan Police Department in 2016 as Director of the Office of Human Resource Management. In this role, she oversaw the hiring, managing, and retaining of a qualified and diverse workforce, which includes recruitment efforts for new police officers. In May 2017 she was asked to serve as acting Director of the MPD's Professional Development Bureau, which includes the Recruiting Division, Metropolitan Police Academy Division, Human Resource Management Division and the Disciplinary Review Division. In March 2018, she was named Director of the Recruiting Division.

Before coming to MPD, Kathleen worked in the Department of Human Resources for Fairfax County Public Schools. There, she oversaw the hiring and recruitment of all instructional, administrative, substitute and support positions for the tenth largest school district in the nation. Additionally, she was responsible for managing the hiring of approximately 3,000 instructional staff for the 2014-2015 school year. Her responsibilities also expanded to include developing leadership programs for staff and supervising full-time team members.

Kathleen also spent time with the State of New Jersey’s Office of the Child as the Director of Administration and Communications where she directed all administrative functions and served as the first point of contact for all media outlets. Her previous experiences include Charlotte Mecklenburg Schools, Department of Mental Health for the State of New Jersey, and University of North Carolina, Charlotte.

When not at work, Kathleen is a full-fledged sports mom partaking and cheering for her son’s sports games. She prides herself of being a supportive support mom and has been busy attending football, basketball, and track competitions and games for the past seven years. She is also passionate about issues pertaining to the homeless and volunteers when her schedule permits at homeless shelters. While in her career in Agency Counseling, she completed a year-long internship in a homeless shelter. She is also a member of Alpha Kappa Alpha Sorority, Inc. and Jack and Jill of America, Incorporated.

Kathleen holds a Bachelor of Arts in Early Childhood Education from the University of North Carolina at Chapel Hill, and a Masters of Arts in Agency Counseling from the University of North Carolina at Charlotte. She has completed the Educational Leadership Certification Program at George Mason University. She is also certified in Administration and Supervision PreK-12, as well as Elementary Education PreK-6. Her professional development experiences include Adaptive Schools Training, Center for Creative Leadership, Behavior Event Interviewer Training, and the Society for Human Resources Management Certification Class.