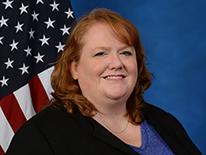 Kelly oversees MPD’s policy development branch and the agency performance management program that includes measuring, evaluating, and reporting on agency initiatives. She manages the legislative affairs, and works closely with the Council of the District of Columbia, United States Congress, and partner agencies. Kelly advocates on behalf of the agency at hearings and in interagency efforts. She also briefs community members on key legislative issues.

With over 20 years of experience in Public Administration, Kelly has a variety of experience directing and overseeing organizational development, performance management, and strategic planning. Some of her previous experiences include directing Hands on DC, an all-volunteer community program, and working for Youth Service America and Intercom International Consultants. Kelly first came to the District government in 2001 as a Capital City Fellow, a program that positions individuals with advanced degrees to meet the challenges of local government management while developing talent for the District of Columbia. She was a recipient of MPD’s Bureau Employee of the Year in 2011, Meritorious Service Medals in 2009, 2004, 2006 and 2009, and Department Commendations in 2002 and 2004.

Kelly moved to the District in 1989 to attend the American University. She holds a Master of Public Administration from their School of Public Affairs, and a Bachelor of Arts Degree from the School of International Service. Additionally, Kelly studied at the University of Copenhagen in Denmark’s International Study Program.

When not working, Kelly enjoys hiking with her dog, cheering on the New England Patriots and Boston Red Sox, and spending time with family in New England and Denmark.