The Facts on DC Marijuana Laws 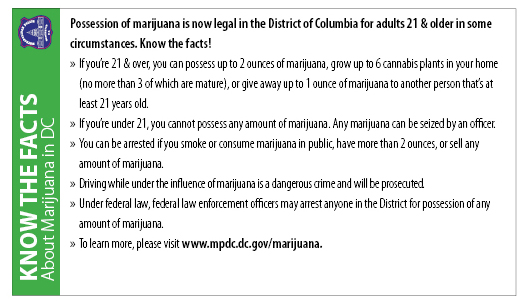 As of 12:01 am on Thursday, February 26, 2015, the possession of small amounts of marijuana is legal in the District of Columbia - in some circumstances - for adults 21 years of age and older.

Know the facts about marijuana possession!

What’s no longer a criminal violation?

In November 2014, District voters approved the Legalization of Possession of Minimal Amounts of Marijuana for Personal Use Initiative (commonly known as Initiative 71). The new law becomes effective on February 26, 2015.

As a result, it is legal for a person who is at least 21 years old to:

What is still a criminal violation?

A person can still be arrested for:

Marijuana possession by persons under 21 years of age is not allowed.

Initiative 71 did not change existing law on marijuana possession for anyone under 21 years of age: It is still illegal.

A person under 21 with more than two ounces of marijuana can be arrested.

If an MPD officer sees a person under 21 with up to two ounces of marijuana, it will be seized. However, the person will not be arrested or issued a ticket.

If the person says they are at least 21 years old but cannot prove their age, the person will be issued a warning ticket by the MPD officer. The seized marijuana will be returned if the person brings the warning ticket to the police station in the police district where the seizure occurred (no sooner than 24 hours and no later than 21 days after the seizure) and provides proof of age.