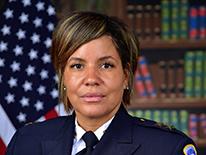 Morgan C. Kane, MPA, currently serves as the Assistant Chief of Police for Patrol Services North (PSN), which includes the Metropolitan Police Department’s Second, Third, Fourth, and Fifth Patrol Districts. Prior to her appointment as the PSN bureau chief in April 2022, Assistant Chief Kane led the Technical and Analytical Services Bureau (TASB), which oversees all information technology services, as well as the research and analytical services used to support innovative policing operations and public safety practices. TASB also includes the Records Division, Fleet Services Division, Equipment and Supplies Division, and the Facilities Liaison. Kane was appointed to the rank of Assistant Chief of Police in July 2021.

Assistant Chief Kane joined the Metropolitan Police Department in December 1998, and began her career in the First District following her training at the Metropolitan Police Academy. Assistant Chief Kane has served in all ranks, first achieving sergeant in 2004. Kane attained lieutenant in 2007, captain in 2012, and inspector in 2014. In August 2016, Kane was appointed as the commander of the First District.

During her career with the MPD, Assistant Chief Kane has worked in a variety of posts. In addition to patrol work as an officer, sergeant and captain, Kane was also assigned to the Office of Organizational Development, where she was responsible for developing, researching, writing, and editing Department policies. Kane was then assigned to the newly-created Office of Homeland Security and CounterTerrorism, where she assisted the commanding officer with establishing this premier division. In January 2007, Assistant Chief Kane transitioned to the Executive Office of the Chief of Police (EOCOP). As the sergeant for the Chief of Police, Kane was responsible for establishing protocols for the office, as well as for preparing and executing the vision and directives of the Chief. She was also responsible for managing the daily operations of the office. Later that same year, Kane was promoted to lieutenant, and her responsibilities in the office expanded. Assistant Chief Kane spearheaded many of the Chief’s crime prevention, legislative, executive, congressional, and community priorities.

Assistant Chief Kane was promoted to captain and assigned to the Fifth District in December 2012 where she served as the assistant district commander until February 2014, when she was appointed to the rank of Inspector. Kane returned to the Executive Office of the Chief of Police, serving as the chief of staff. In this key role, Kane was responsible for managing, strategizing, and leading the day-to-day operations and priorities of the Chief. Throughout her tenure in the EOCOP, Kane served as the Chief’s liaison to the Council, Mayor’s Office, partner government agencies, federal entities, residents, and business stakeholders. Kane also led the Executive Protection Unit and citywide Nightlife Unit.

Kane was then promoted to commander of the First District in August 2016, where she had the honor and privilege of leading the hardworking men and women of the patrol district for just short of five years as they endeavored to make neighborhoods safe for residents and visitors to live, work, and play. As the commanding officer of the district, Kane managed the patrol operations, short and long-term crime fighting strategies, and citizen engagement priorities in one of the most diverse districts in the city. Assistant Chief Kane also served on several boards, panels, and citywide working groups.