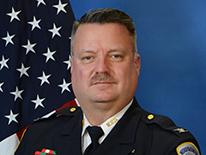 Commander Ralph Ennis currently heads the Metropolitan Police Academy, which provides training services to the members of the Department primarily and to members of outside agencies, so they can become more capable, knowledgeable, and professional employees serving their organizations and the District.

Commander Ennis has over 23 years of police service at the Metropolitan Police Department. Beginning his career first as a recruit officer in 1994, he quickly rose through the ranks, achieving the rank of Sergeant in 1999 and Lieutenant in 2001, and Captain in January 2007. He was appointed as Chief Lanier’s Chief of Staff in 2007 and promoted to the rank of Inspector, then Commander. In his role as Commander, he was responsible for the Tactical Information and Intelligence Division where he oversaw criminal intelligence, the Joint Terrorism Task Force, and MPD’s CCTV and Shotspotter programs, the Command Information Center, and the Joint Operations Command Center. Commander Ennis served in the Executive Office of the Chief of Police where he served under Chief Lanier’s direction until her departure in September of 2016. Commander Ralph Ennis oversaw the establishment of the Tactical Information Division, a new division of the department tasked with overseeing all IT functions for the agency.

Throughout his career, Commander Ennis has served in a variety of assignments, including the Seventh and First Districts as a Patrol Officer, and the Fourth District and Internal Affairs as a Sergeant. As a Lieutenant, he worked in the Fourth District’s Special Operations Division, Office of Homeland Security and Counterterrorism, and the Executive Office of the Chief of Police. While working in the Special Operations Division, Commander Ennis closely assisted with the implementation and planning of numerous complex details, demonstrations, and Presidential Inaugurations.