Detectives from the Metropolitan Police Department's Homicide Branch announce a wanted suspect has been apprehended for a homicide that occurred on Tuesday, May 11, 2021, in the 1500 block of Maryland Avenue, Northeast.

At approximately 3:51 am, members of the Fifth District responded to the listed location for the report of an unconscious person. Upon arrival, members located an adult male victim suffering from an apparent stab wound. DC Fire and Emergency Medical Services responded to the scene and found no signs consistent with life. The decedent remained on the scene until being transported to the Office of the Chief Medical Examiner.

The decedent has been identified as 43 year-old Kareem Elliot Watkins, of Temple Hills, MD.

Brooks was wanted on a DC Superior Court arrest warrant charging him with Second Degree Murder while Armed. Brooks will be held in the state of Georgia until being extradited to Washington, DC. 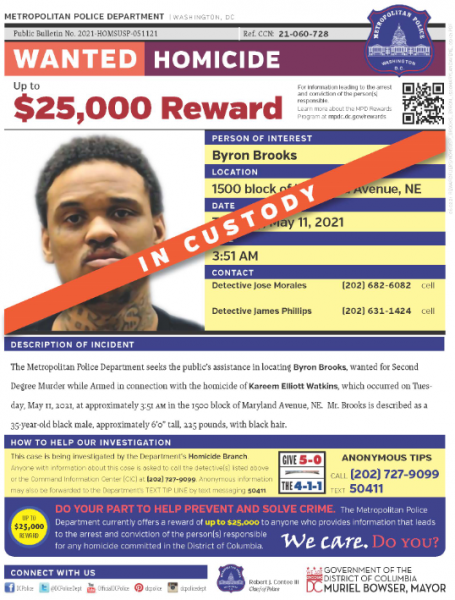