Person of Interest Sought in a Kidnapping Offense: 2800 Block of Dumbarton Street, Northwest

Detectives from the Metropolitan Police Department's Special Investigations Branch seek the public’s assistance in identifying a person of interest in reference to a Kidnapping offense that occurred on Tuesday, January 15, 2019, in the 2800 block of Dumbarton Street, Northwest.

At approximately 4:55 pm, the suspect grabbed a juvenile victim and attempted to lure them away from the listed location. The suspect then fled the scene on foot.

The suspect in this case is described as a white female who is approximately 30-40 years old, 5’7”- 5’8” in height and has blonde hair which is in a Mohawk hairstyle. She was last seen running Eastbound on Dumbarton Street, Northwest, wearing a white coat.

A nearby surveillance camera captured a person of interest that can be seen in the photo below: 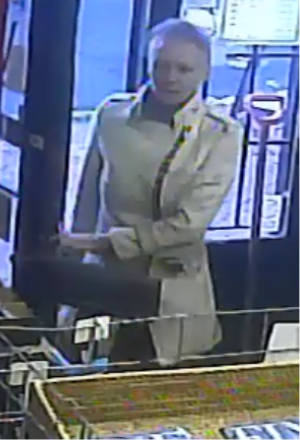 Anyone who can identify this individual or who has knowledge of this incident should take no action but call police at (202) 727-9099 or text your tip to the Department's TEXT TIP LINE at 50411. Crime Solvers of Washington, DC currently offers a reward of up to $1,000 to anyone who provides information that leads to the arrest and indictment of the person or persons responsible for a crime committed in the District of Columbia.