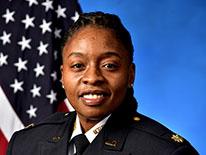 Inspector LaShay Makal currently leads the Strategic Intelligence and Tactical Branch (SITB), which was created in December 2021. Prior to her promotion in December 2021, Makal served in the Special Operations Division of the Homeland Security Bureau as the captain of the Critical Incident Response Branch. (CIRB)

LaShay Makal began her service at the Metropolitan Police Department in 2004 as a patrol officer in the 6th District. In 2008 she was assigned to the Forensic Science Division as a Crime Scene Officer. In 2012 she was promoted to sergeant and assigned to the Third District supervising the Crime Suppression Team (CST). From there, she began her tenure with the Narcotics and Special Investigations Division (NSID) as sergeant of the Gun Recovery Unit.

In 2016, Makal was promoted to lieutenant where she led the First District’s Special Mission Unit, she was responsible for the management of the Crime Suppression Team and the Mountain Bike Tactical Unit. Upon being promoted to detective lieutenant, Makal managed the Sixth District Detectives Unit. In 2017, Makal returned to NSID serving as lieutenant of the Gun Recovery Unit, where her team was responsible for the recovery of illegal firearms.

Makal helped develop and then went on to lead the Violence Reduction Unit (VRU) in 2019. VRU utilizes and intelligence-based, data-driven approach to identify, interdict, and interrupt violent offenders. Makal was promoted to captain in May 2021, continuing her supervision at NSID and serving as the assistant district commander managing several units, including the Violence Reduction Unit, Electronic Surveillance Unit (ESU), Criminal Apprehension Unit (CAU), and the Asset Forfeiture Unit (AFU) .

In October 2021, Makal was assigned to the Homeland Security Bureau, where she served as captain of the Critical Incident Response Branch, which includes the Explosive Ordinance Disposal Unit (EOD), the Emergency Response Team (ERT), and the Domestic Security Operations Unit (DSO).

Inspector Makal has received numerous recognitions during her career, including being honored as Lieutenant of the Year in 2019. Makal received a Bachelor of Science at Shepherd University and a Master of Business Administration at Strayer University. In 2021, she completed a certification in Public Management at the George Washington University, a nationally-acclaimed Program for Excellence in Municipal Management (PEMM) which has helped develop mid-level and senior managers and leaders in DC Government for the last 25 years.