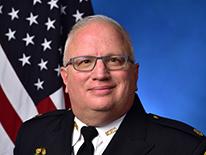 Sylvan Altieri currently serves as commander of the Fifth District, which covers portions of the Northeast quadrant of the city.

Commander Altieri began his career with the Metropolitan Police Department in 2000. During his time as patrol officer in the First District, he regularly conducted foot, bike and vehicle patrol in 1D. In 2002, he became an Investigator with the First District Focus Mission Team, and he worked undercover on a number of cases. Altieri was promoted to detective in 2005.

Between 2005 and 2014, Altieri worked as a detective in a number of different parts of the MPD. As a detective in the Seventh District, Altieri investigated general crimes. He investigated physical and sexual abuse of children while assigned to the Youth and Family Services. During his time in the Internal Affairs Division he conducted confidential investigations of civilian and sworn members. Finally, he investigated financial fraud, identity theft, computer and tech crimes while assigned to the Financial and Cyber Crimes Unit (FCCU).

Commander Altieri was promoted again in 2014, this time to the rank of sergeant, first as a patrol sergeant in the Third District, and later as a sergeant in IAD and a detective sergeant in the Financial and Cyber Crimes Unit.

In January 2018, when Altieri was promoted to lieutenant, he returned to the Third District. He was later assigned to the Internal Affairs Division, responsible for reviewing all serious Use of Force cases for the MPD, supervising IAD agents, and reviewing Body Worn Camera (BWC) footage.

On December 22, 2022, Sylvan Altieri was promoted to commander of the Fifth District by MPD Police Chief Robert J. Contee.

Inspector Altieri has received several awards and accolades from the Metropolitan Police Department, including two Achievement Medals; a Unit Citation; PSA Officer of the Year for the First District (2002); and IAB Employee of the Year (2012). He is an active member of both the American Civil Liberties Union (ACLU) and the Southern Poverty Law Center. He is a proud veteran of the US Army.