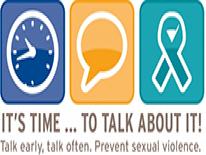 The Metropolitan Police Department joins law enforcement agencies and partners across the nation in recognizing the importance of education and awareness surrounding sexual assault and sexual violence. Each April, MPD helps spread the message during Sexual Assault Awareness Month. The National Sexual Violence Resource Center also offers several programs to help bring the issues to light and educate the nation about the importance of taking a stand and being a part of the solution to ending sexual violence.

MPD developed a poster campaign to discourage date rape and sexual predation in area clubs. The posters have been printed in English and Spanish and distributed to area nightclubs, universities, and other locations around the District of Columbia.

As part of Sexual Assault Awareness Month, MPD added this student-created video. Samantha Stendal, a film student at the University of Oregon, produced the video to encourage college-aged men to treat their female friends with respect and dignity, particularly when they are at their most vulnerable.