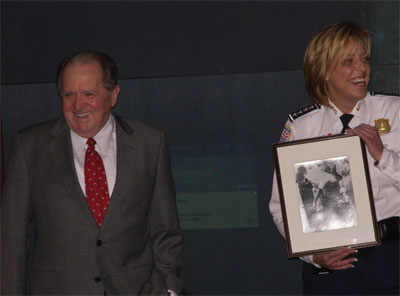 Chief Maurice Cullinane and Chief Lanier with a famous photo of Cullinane from 1957.

On Friday, December 21, 2007, Santa Claus visited the Department in the form of retired Chief Maurice Cullinane. Everyone should know Chief Cullinane, not only because he was a former chief, and a good one at that, but because he was the subject of a famous Pulitzer prize winning photograph taken in 1957.

Chief Cullinane has been helping in the recovery of historic items that had disappeared over the years, and on Friday he ensured that a true piece of MPD history was returned, but not without a promise to care for it.

Chief Cullinane prevailed upon a retiree to return the Eighth Precinct arrest log, which may be the first written record of the assassination of President Abraham Lincoln and the attack on the Secretary of State William Seward. This book is not only MPD history, it is a piece of important national history that sets us apart from other police departments.

It must be understood that the individual who had this book did not steal it. The book was pulled from a dumpster many years ago, and taken into private care by an individual who recognized its import. We are pleased to have it returned.

The former chief turned the book over to Chief Lanier and after a brief meeting, was escorted to the JOCC and was introduced to the entire command staff who complimented Chief Cullinane with a standing ovation.
Following the meeting with the command staff, both chiefs went up to look over the police museum and discuss the care of the historic log book.

Chief Cullinane gave the Department an early Christmas present: the gift of an artifact that reminds us all of this great department’s place in history. The book will be on display as soon as the appropriate conservation efforts have been taken and a protective display case can be purchased.