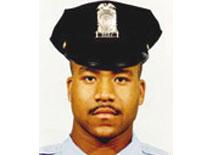 On Feb. 5, 1997, at 3 am, Officer Brian T. Gibson, 27 was ambushed and shot to death while in full uniform sitting in his marked patrol car at a traffic light outside the IBEX Nightclub at Georgia and Missouri Avenues, NW. Within three minutes after the shots were fired, members of the Fourth District apprehended Marthell Nathaniel Dean, who had been escorted from the IBEX club by an off-duty officer just prior to the shooting. Dean was found guilty of First Degree Murder and is currently serving a life sentence without the possibility of parole.

Master Patrol Officer Brian Gibson was killed in the line-of-duty on February 5, 1997. As they have every year since his death, the Gibson Family invites friends, family and co-workers to join them at Georgia and Missouri Avenues, NW at 3:00 am, to share a moment of remembrance and reflection. In light of the recent series of injuries to MPDC officers, it offers an opportunity for us to remember the great sacrifice made by all our brothers and sisters every day, while particularly paying tribute to MPO Gibson and his family. A reception will follow in the Fourth District Community Room immediately following the vigil. For more information, please contact Sergeant Brett Parson of the Family Support Team at (202) 497-0989.

View personal remembrances from the officer's friends and family.