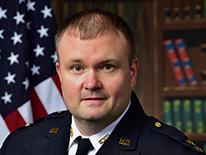 Leslie Parsons currently serves as the Assistant Chief of the Investigative Services Bureau at the Metropolitan Police Department. The Investigative Services Bureau (ISB) works with the community to solve crimes, bring offenders to justice, support the recovery of victims, and protect witnesses. Appointed to this position in January 2021 by Chief Robert J. Contee III, Assistant Chief Parsons is responsible for the implementation of goals and objectives set by the Chief of Police and Mayor of the District of Columbia.

Assistant Chief Parsons first began his law enforcement career with the Metropolitan Police Department in 1999 as a recruit. Since then, he has been assigned to several police districts and has held numerous investigative positions. Assistant Chief Parsons’ first assignment after graduating the Metropolitan Police Academy was as a patrol officer in the Third District. When the patrol service area boundaries were realigned, he was transferred to the Fifth District in order to maintain the same geographical area of patrol. In 2005, he became a crime scene search officer in the Crime Scene Investigations Division, where he collected evidence including DNA and latent prints, and documented crime scenes with written reports and photographs.

In December 2005, Parsons was promoted to the rank of sergeant. He returned to the Fifth District as a patrol supervisor. In April 2008, he returned to the Crime Scene Investigations Division (CSID). At CSID, Parsons supervised both Crime Scene Search and Mobile Crime Technicians, reviewing case jackets for accuracy and completion, and coordinating investigative efforts with detectives, among other duties.