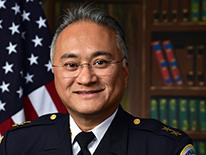 Assistant Chief Manlapaz first joined the Metropolitan Police Department in August 1994, and began his career as a Patrol Officer assigned to the Second Police District. In June 1996, he was assigned to the Asian Liaison Unit where he walked foot beat in the Chinatown neighborhood located in the First District. Later that same year, he began working in the Narcotics and Special Investigations Division (NSID). He was promoted to Sergeant in February 1999 and assigned to the Fifth District. Shortly after transferring to the Fifth District, he began supervising the Narcotics Unit in the Mobile Force, a special team of members who supported investigations based on where drug-related crimes were occurring. In May 2000, he returned to Gang Crimes Unit in NSID, where he played an integral role in establishing the Narcotics Strike Force, a unit targeting open air drug markets.

In February 2006, Assistant Chief Manlapaz was promoted to Lieutenant and assigned to the Third District, where he worked in both the Administrative Office and then Vice Investigations, before transferring to the Third District Detectives Unit in November 2007. Seven months later, he was assigned to the Homicide Division where he oversaw a platoon of detectives investigating homicides. Prior to being promoted to Captain and returning to the Fifth District in January 2012, Manlapaz served as the Director of Criminal Intelligence Branch, which investigates gang crimes and homeland security issues from December 2009 through December 2011. In October 2012, he returned to Criminal Investigations Division (CID), which is in charge of all district detectives. He then moved to the Special Investigations Branch within CID, where he oversaw members investigating Sexual Assaults, Financial Crimes and Bank Robberies. In November 2014, Assistant Chief Manlapaz was promoted to Commander of the Fourth District. In his capacity, he oversaw nine Police Service Areas, including in the business corridors of the 14th Street, Georgia and New Hampshire Avenues, to mention a few areas.

Manlapaz graduated from the University of Maryland, College Park with a BA in Criminal Justice in 1992. Assistant Chief Manlapaz earned a Master of Science Degree in Management from Johns Hopkins University in May 2015.