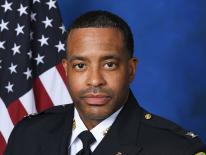 In September 2012, Robinson was promoted to Sergeant and reassigned to the Sixth District. As a first-line supervisor, Robinson used his leadership skills by engaging with the officers by policing proactively while maintaining field supervision. While serving as a Sergeant at 6D, the Sixth District received the 2014 Crime Reduction Award. In 2015, Robinson was selected to serve as a Sergeant in the Criminal Interdiction Unit (CIU) in the Narcotics and Special Investigations Division (NSID). There, he oversaw intelligent-led policing, operation planning, search warrants, robbery trends, and violent crime. He was also responsible for the assurance of short/long-term investigations. The team partnered with federal and local agencies in their efforts to dismantle violence in our communities. Robinson was one of the many recipients from the team to receive an Achievement Medal from the Chief of Police. A year later, Robinson was assigned to the NSID’s citywide Criminal Apprehension Unit (CAU), which focuses on capturing individuals with outstanding arrest warrants. During his tenure, the team cleared over 950 District Court and DC Superior Court warrants.

In January 2017, Robinson was promoted to Lieutenant and assigned to the First District. As a Manager of a Police Service Area (PSA), Robinson focused on MPD’s mission of engaging in community policing, responding to calls of service, preserving life, and maintaining the integrity of the Department. In July 2017, Robinson returned to NSID where he served as a Lieutenant in the citywide Narcotics Enforcement Unit (NEU). The team addressed drug complaints that were identified by the community and patrol members throughout the city by conducting field operations. For their outstanding performance, the team was recognized by the Chief of Police and was presented with a Unit Citation Award and an Achievement Medal. In April 2019, he was selected to manage the Special Operations Divisions, Emergency Response Team (ERT). The ERT responds to all barricaded criminals, hostage takings, terrorist incidents, high risk warrants and other unusual incidents with the intent to protect the lives of the innocent while trying to achieve a peaceful resolution. During his tour, the team continued to conclude barricades by successfully detaining those involved in criminal acts and mental health consumers in crisis.

Robinson was promoted to Captain in May 2021 and tasked with leading the Critical Incident Response Branch (CIRB) for the city, which includes the Domestic Security Operations Unit (DSO), Explosive Ordinance Disposal Unit (EOD), and the Emergency Response Team (ERT).

Commander Robinson has received numerous awards and recognitions during his career with MPD, including Achievement Medals, Unit Citations, and PSA Officer of the Year on multiple occasions. He is also a member and previous coordinator of the Metropolitan Police Department’s Honor Guard. He proudly served this country as a United States Marine and was honorably discharged after serving eight years. While serving in the Marine Corps, Robinson obtained his Associate’s Degree in Criminal Justice from Park University of Parkville, MO. He is currently enrolled and projected to receive his Bachelor’s Degree in Criminal Justice from Park University in the spring of 2022.