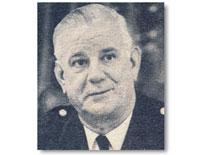 Born in Havre De Grace, Maryland, in 1905, Robert Murray joined the Metropolitan Police department in 1930, and began as a footman in the Tenth Precinct. In his early career he was a Gold Medal recipient for thwarting a holdup and spent the majority of his time in various units of the Detective Bureau.

In December of 1951, Robert V. Murray who was Chief of Detectives took over the Department when public support was waning, and there seemed to be one embarrassment after the next. The perception and in some cases reality of corruption was demoralizing to the Police Department and placed the new chief in an unenviable position.

Once he was made Superintendent he immediately made an inspection of every precinct and facility under his command and promised the rank and file officers his support. Superintendent Murray then developed a code of ethics for police officers and officials, which in particular dealt with the acceptance of gifts. He also created a new branch to investigate police corruption named the Internal Investigations Division. This was the precursor to the Internal Affairs Division.

In 1953, the District Government reorganization Act created the official position and title of Chief of Police and effectively eliminated the former rank and title of Major and Superintendent.

Chief Murray worked hard to improve the Police Department’s image, and made strides in reducing the crime rate. He was chief during the trying hot summer Transit Strikes of 1955 and 1956, and approved the wearing of the first short sleeve shirts that were donated by appreciative citizens following the Department’s handling of the strikes.

Under his command the Police department expanded to three thousand members by 1960. He initiated the use of canines, radar, helicopters and experimented with hand held radios. He put forth the idea of the Cadet program and focused attention on juvenile crime. In many ways Chief Murray was responsible for ushering the Police Department into the current modern era of policing. One of his final major acts was to fully integrate assignments. No longer would their be particular assignments held for white officers, or particular beats given only to black officers.

Chief Murray and the Police Department earned public accolades for their handling of the Transit strikes, the March on Washington, and the funeral of President John F. Kennedy. Chief Murray served for thirteen years and should be credited for making some of the most sweeping, effective and long lasting changes in the department’s history.