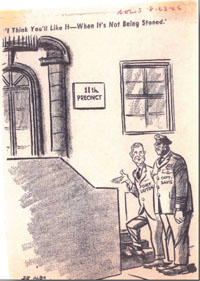 He began his career in 1939, and was assigned to the Second Precinct where he walked a foot beat on 7th Street, NW.  While on that beat, he earned the nickname “Big Foot Davis.”  He earned that name by policing his beat in a manner that ensured that if verbal persuasion did not work, a firm boot in the rear would.

By 1965, Davis had achieved the rank of Captain and was credited with averting major disturbances in the area of the Eleventh precinct when he was transferred there in the midst of growing racial tension between that community and the police.

Davis was promoted to Deputy Chief in 1969 and, having proved instrumental in handling many major events, he went on to become the Patrol Division Commander. Chief Davis retired in 1973, after 34 years of service. He was a man who was well-liked, well-regarded and highly respected.  He paved the way for many, and represented our Department with distinction.