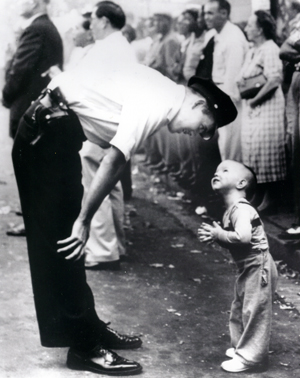 A major effort is underway to recover the great history of the Metropolitan Police Department (MPD), and to reconnect with our past. Chief Cathy L. Lanier has initiated “Project Pride Restoration,” in an effort to enhance awareness about the MPD’s tremendous history. One of the steps in this effort is to adorn the police facilities with historic and contemporary photographs that help tell MPD’s story and demonstrate our unique role in history. The Maurice T. Turner, Jr. Metropolitan Police Academy Annex has 20 amazing photographs on display in the classroom hallway now. Twenty more photographs will be hung at the main Academy building this week. The photographs cover a wide range of topics and eras, but each one tells the viewer something about the Metropolitan Police Department’s history and its future.

On hand at the 1D-1 unveiling was an unframed copy of a world famous Pulitzer-prize-winning photograph taken in 1957 by William Beall of then-Officer Maurice Cullinane. Officer Cullinane was photographed bending over a small child who had wandered out onto the parade route on H Street, NW.

Retired Chief Cullinane was among those in attendance for the small ceremony. This is just the beginning as the Department moves forward and reaches back. Members should have already read about Sergeant Nicholas Breul and Senior Police Officer Kenneth Stewarts’ interviews with former members and their efforts to locate artifacts for the Police Museum. As more photographs are installed, look for announcements inviting current and former members to attend.

The MPD Police Museum will officially open on September 11, 2007, at 9:30 am and it will be located at Police Headquarters, in the Henry J. Daly Building, 300 Indiana Avenue, NW, 6th Floor.