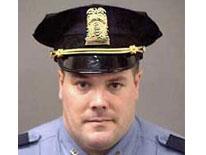 At about 5 pm on Sunday, May 30, 2004, Sergeant John S. Ashley was on routine patrol when he suffered a medical emergency while in the 1600 block of 30th Street, NW. While assisting a young lady who was trying to catch a dog, he fell unconscious after running a short distance. Subsequently, MPDC and DC Fire and Emergency Medical Services personnel were summoned to the scene to assist the officer.

With CPR in progress, Sergeant Ashley was transported to The George Washington University Hospital, where he was pronounced dead at 5:36 pm.

Sergeant John S. Ashley, born October 4, 1966, joined the Metropolitan Police Department on January 27, 1997 as part of Recruit Class 97-2. He began his career in the Sixth District, served as an investigator in 7D, a sergeant in 4D and was last assigned as sergeant in the Second District.

While a detective, Sergeant Ashley was instrumental in the closure of a car-bombing incident on upper Wisconsin Avenue, NW, in the summer of 2002. As a result of his active policing in the Second District, he developed lasting relationships with community members. Commander Jeffrey Moore characterized Ashley as having a “great work ethic…he died doing something he loved.”