Arrest Made in a Burglary Two of an Establishment Offense: 1500 Block of New York Avenue, Northeast

Detectives from the Metropolitan Police Department's Fifth District announce an arrest has been made in a Burglary Two of an Establishment offense that occurred on Thursday, November 24, 2022, in the 1500 block of New York Avenue, Northeast

At approximately 1:35 am, the suspects entered an establishment at the listed location. Once inside, the suspects took property and then fled the scene. One of the suspects was apprehended by responding officers.

On Thursday, November 24, 2022, 28-year-old Job Dingle, of Northeast, DC, was arrested and charged with Burglary Two.

The additional suspect was captured by a surveillance camera and can be seen in the photo below: 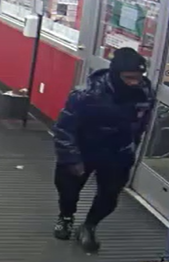 This case remains under investigation. Anyone who can identify this individual or has any information about this incident should take no action but call police at (202) 727-9099 or text your tip to the Department's TEXT TIP LINE at 50411. Crime Solvers of Washington, DC currently offers a reward of up to $1,000 to anyone who provides information that leads to the arrest and indictment of the person or persons responsible for a crime committed in the District of Columbia.