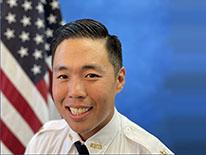 David Hong currently serves as the inspector of the Metropolitan Police Academy. The MPA provides training services to the members of the Department primarily and to members of outside agencies, so they can become more capable, knowledgeable, and professional employees serving their organizations and the District. He was promoted to Inspector on July 27, 2022.

David Hong began his career with the Metropolitan Police Department in 2007 where he served as a patrol officer in the 1st District. In 2014, he became a sergeant in 5th District where he transitioned into the district’s narcotic investigations supervisor. In 2015, he took an assignment as a detective sergeant with the Youth and Family Services Bureau, where he was assigned as the supervisor of the FBI Child Exploitation Task force, investigating internet crimes against children.

David was honored for Captain of the year for 2021.