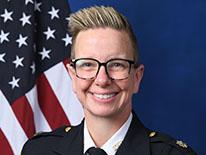 Michelle J. Caron currently serves as inspector of the Fourth District and Substation. The Fourth District covers the upper Northwest (east of Rock Creek Park) and Northeast quadrants of the city, including the neighborhoods of Carter Baron, 16th Street Heights, Fort Totten, Lamond/Riggs, Shepherd Park, Takoma and Petworth. She was promoted to inspector by Chief of Police Robert J. Contee, III, in April 2022.

Michelle Caron began her career with the Metropolitan Police Department as a patrol officer in 2003, when she was assigned to PSA 307 in the Third District. In 2008, Caron was assigned to the Crime Scene Investigations Division as a Crime Scene Technician. While there, she processed various crime scenes including shootings, stabbings, robberies, thefts. She was promoted to the rank of sergeant in February 2010 and assigned to the Sixth District for a short while before returning as a sergeant to Crime Scene Investigations, serving as primary contact for all internal and external evidence submissions, including sexual assault kits backlog submissions

In February 2014, Caron was promoted to lieutenant and assigned to the Second District. Six months later, in July of 2014, Caron transferred to the Third District Detectives Unit (3DDU) before moving to Homicide Branch. During her time as platoon II lieutenant in the Homicide Branch, Caron supervised various types of criminal/death investigations, including homicides, suspicious deaths, special victim cases, and natural death cases.

When Michelle Caron was promoted to captain in September 2016, she was assigned to the Seventh District. In April 2017, Caron moved to the Youth and Family Services Division (YFSD), to oversee all units within the Division and also serve as spokesperson for YFSD for high-profile missing persons investigations. Caron served as sector and administrative captain in the sixth district from October 2017, until she moved to the Special Operations Division (SOD) as Tactical Patrol Branch captain in April 2018. Caron was the first woman to be named to this post.

Inspector Michelle Caron was born in the Netherlands and grew up in New Jersey. She has lived in the DC region for nearly 25 years. After receiving her undergraduate degree from Ithaca College in 1995 she got a master’s degree from Johns Hopkins University in 2009. She is currently enrolled in the Naval Postgraduate School. She lives in the Navy Yard area of DC with her wife and two dogs.