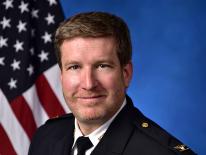 In 2013, Commander Bagshaw was promoted to detective and investigated robberies and felonies in the Fourth District before being promoted to sergeant in 2014. During his four years as a sergeant, Commander Bagshaw was assigned to various units to include the patrol in the Sixth District and First District, hiring of new officers in the Recruiting Division, and assisting with administrative function for the Professional Development Bureau and the Patrol Services South Bureau.

In 2018, Commander Bagshaw was promoted to lieutenant and served with the First District for four month before being assigned to the Special Operation’s Division Planning and Logistics Section. During those four years, Washington, DC has hosted significant planned and unplanned historic events such as the 2018 Stanley Cup Finals and Victory Parade, the 2019 World Series and Victory Parade, the annual March for Life, 4th of July Celebrations, among many, many other demonstrations; Commander Bagshaw was integral in planning and assisting with the operations of these events. In 2021, Commander Bagshaw was promoted and remained in the Special Operation Division as the Captain of the Special Events Branch. In this role, he oversaw First Amendment demonstrations, activities and protests, planning of special events, traffic safety, and the MPD Motors Unit.