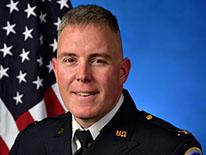 Commander Sean Conboy currently heads the MPD's Evidence Control Division (ECD), which handles over 100,000 recovered or seized property cases each year. The major responsibilities of the ECD are securing property safely and returning property to its rightful owners.

Sean Conboy began his career with the Metropolitan Police Department in April 2006 as a patrol officer in the Seventh District. In February 2010, he became a sergeant, supervising PSA 505, and in March 2012 he transitioned to an administrative role at Patrol Services and School Security Bureau. After serving as the Street Crimes Unit supervisor from May 2013 to January 2014, Conboy was promoted to acting lieutenant in the Third District. From there, he served in the Executive Office of the Chief of Police in 2014 and as a Public Information Officer in the Office of Communications through 2016. Conboy then served in the Internal Affairs Division where he managed administrative and criminal investigations involving use of force or serious misconduct, including police-involved shootings, and coordinated case presentation to the Fraud and Public Corruption section of the United States Attorney’s Office.

Promoted to captain in January 2019, Sean Conboy served as the assistant district commander of the Fourth District. In this role, he managed the daily operations of Park View, Crestwood, and 16th Street Heights neighborhoods and served as the primary watch commander for the midnight shift. In June 2019, Conboy served as the operations manager for the Joint Strategic and Tactical Analysis Command Center Division within the Homeland Security Bureau of MPD. He was directly responsible for the 24-hour operations of the Department’s command center and oversaw agency resources and support functions as part of unified and multi-agency operations for critical and designated special events.

He was promoted to commander on December 17, 2021 and appointed to lead the Metropolitan Police Academy (MPA). The MPA provides training services to the members of the Department primarily and to members of outside agencies, so they can become more capable, knowledgeable, and professional employees serving their organizations and the District.

Sean Conboy served as the captain of the Research and Analytical Services Branch within the Technical and Analytical Services Bureau since May 2021. In this position, he was responsible for overseeing the development of statistical reports, charts, and maps covering crime trends and patterns within specified periods and or geographic boundaries in order to inform the deployment of resources based on historical and recent crime trends and patterns.

Sean Conboy received a Bachelor of Arts in Political Science with a concentration in Public Law at Norwich University in April 2005.