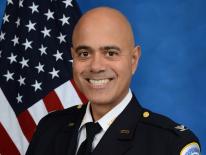 Commander Rivera began his career with MPD in 1992. After graduating from the Academy, he was assigned as an officer in the Fourth District until 1997 and then the Police Recruiting Unit. In 1999, he was promoted to sergeant and returned to the Fourth District. He was later assigned to the Internal Affairs Division where he investigated allegations of misconduct and corruption practices by members of the department.