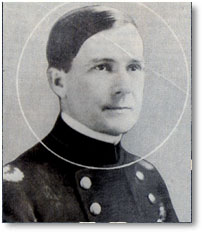 Raymond Pullman was, like many other previous choices for Major and Superintendent, born in Washington DC. Little is known about Mr. Pullman other than that he was a prominent citizen, who was well respected and had, as many before him, been a “newspaper man and a student of government.”

He entered into the job as the world was already engaged in a global conflict into which the United States would soon be drawn. This fact created an enormous problem for Superintendent Pullman as the ranks of the city swelled with government workers and the ranks of the police department dwindled as officers were drafted, volunteered, and left for better paying jobs that had become available. Things got so bad that the War Department assigned a score of enlisted men as temporary privates for duty as policemen.

Superintendent Pullman, or Chief Pullman as newspapers and citizens were now referring to him, created the Home Defense League. This was a volunteer force of citizens who would be trained and managed by the Metropolitan Police Department to be called out as an auxiliary in times of trouble. He established regular sessions for the training of policemen, particularly in the fundamentals of law, and encouraged his officers to attend schools to educate young children on citizenship and safety.

Superintendent Pullman also secured an increase in salary in order to maintain his present personnel and to attract more men to the profession, which at the time was one of the lowest paid in government service.

He presided as Chief over one of the city’s darkest hours in July of 1919, when a major race riot broke out and spread violence and death across nearly every section of the city. The Home Defense League was called out, and with the assistance of the military, the rampaging violence was brought under control.

Superintendent Pullman was also responsible for the creation of the Traffic Division, and the Woman’s Bureau. The latter became a national model for women in policing and in the handling of juvenile crime.

In February of 1920, following a trip to New York, Superintendent Pullman contracted pneumonia and died in office, just as Superintendent Moore had 22 years before.