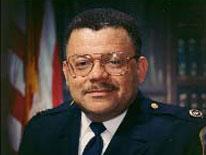 Charles H. Ramsey was appointed chief of the Metropolitan Police Department on April 21, 1998. He retired on December 28, 2006, having been the longest-serving chief of the MPDC since DC Home Rule and the second longest-serving in Department history. Under Chief Ramsey's leadership, the Department regained its reputation as a national leader in urban policing. Crime rates declined by approximately 40 percent during Ramsey's tenure, community policing and traffic safety programs were expanded, and MPDC recruiting and hiring standards, training, equipment, facilities and fleet were all dramatically upgraded.

A nationally recognized innovator, educator and practitioner of community policing, Chief Ramsey refocused the MPDC on crime fighting and crime prevention through a more accountable organizational structure, new equipment and technology, an enhanced strategy of community policing and, since September 11, 2001, new approaches to homeland security and counter-terrorism in the Nation's Capital.

A native of Chicago, Illinois, Chief Ramsey served in the Chicago Police Department for nearly three decades in a variety of assignments. He began his career in 1968, at the age of 18, as a Chicago Police cadet. He became a police officer in February 1971, and was promoted through the ranks, eventually serving as commander of patrol, detectives and narcotics units. In 1994, he was named Deputy Superintendent of the Bureau of Staff Services, where he managed the department's education and training, research and development, labor affairs, crime prevention and professional counseling functions.

Chief Ramsey was instrumental in designing and implementing the Chicago Alternative Policing Strategy, the city's nationally acclaimed model of community policing. As co-manager of the CAPS project in Chicago, Chief Ramsey was one of the principal authors of the police department's strategic vision. He also designed and implemented the CAPS operational model and helped to develop new training curricula and communications efforts to support implementation.

As head of the 4,400-member Metropolitan Police Department, Chief Ramsey worked to improve police services, enhance public confidence in the police, and bring down the District of Columbia's crime rate. In September 1998, the Chief announced a major reorganization of the Department that put more police resources in the community, cut bureaucracy, and enhanced accountability by creating a system of Regional Operations Commands that were responsible for the quality of police services throughout the District. Through enhanced recruiting efforts—including Internet-based advertising and a first-ever lateral-hiring program—the Department has brought its sworn strength up to its fully authorized level of 3,800 sworn members. A restructuring of the Police Service Areas in 2004 helped to put more officers in neighborhood patrols and better align the PSAs with the boundaries of DC neighborhoods.

The Chief also oversaw a multi-million dollar upgrade to district stations and other Department facilities, as well as new communications and information technology, including mobile data computing and the 3-1-1 non-emergency system. Expanded training programs for both police recruits and veteran members—including a unique diversity management course at the United States Holocaust Memorial Museum—enhanced officer performance during Chief Ramsey's tenure. The MPDC received international acclaim for its handling of major events, and the Department took a number of steps to address the continued threat of terrorism in the Nation's Capital.

In the area of community policing, Chief Ramsey redefined the Department's mission to focus on crime prevention. Policing for Prevention, the Department's community policing strategy, encompasses focused law enforcement, neighborhood-based partnerships and problem solving, and systemic prevention efforts. The strategy is supported not only by enhanced training for officers and supervisors, but also by a unique community training initiative called Partnerships for Problem Solving as well as a Senior Citizen Police Academy. Community policing is further supported by new strategies developed by Chief Ramsey to put more officers on the street and partner with the community, including the establishment of special liaison units for DC's Asian, Latino, gay and lesbian, and deaf and hard of hearing communities.

The result of these and other initiatives has been a dramatic reduction in crime in the District of Columbia. In fact, serious crime in DC is at its lowest level since the current method of reporting statistics was first developed in the late 1960s. At the same time, opinion surveys indicate that public confidence in the MPDC rose under Chief Ramsey's leadership.

Chief Ramsey holds both bachelor's and master's degrees in criminal justice from Lewis University in Romeoville, Illinois. A graduate of the FBI National Academy and the National Executive Institute, Chief Ramsey has lectured nationally on community policing as an adjunct faculty member of both the Northwestern University Traffic Institute's School of Police Staff and Command and Lewis University.

His honors include the following: