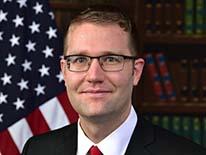 Mr. Marvin Haiman serves as the Chief of Staff for the Metropolitan Police Department. In this capacity, Mr. Haiman oversees daily operations of the Executive Office of the Chief of Police and is responsible for broad agency management and implementing strategic agency objectives. Mr. Haiman is responsible for several organizational units to include the Office of Communications, Office of General Counsel, and the Professional Development Bureau. Mr. Haiman served as the Executive Director of the Professional Development Bureau between 2017 – 2021, leading the Recruiting Division, Metropolitan Police Academy Division, Human Resource Management Division, Disciplinary Review Division, Testing and Assessment Division, Equal Employment Opportunity Division, Office of Communications, and the Strategic Engagement Office (Volunteer Services).

Prior to being named Executive Director, between 2015-2017, Mr. Haiman served in a variety of capacities, including developing the agency’s Office of Volunteer Coordination, serving as Chief of Staff for the Technical Services Division tasked with a broad range of IT operations, and Chief of Staff for the Strategic Services Bureau supporting and leading the administration of police recruitment, training, policy, and volunteer service matters for the Department.

Prior to returning to the Metropolitan Police Department, Mr. Haiman served as Director for the Homeland Security Advisory Council for the United States Department of Homeland Security, establishing several key task forces for the Secretary. Prior to his Federal service, Mr. Haiman served as the Deputy Director of the Recruiting Division and Volunteer Services Coordinator for the Metropolitan Police Department of Washington DC among various other positions. As Deputy Director of Recruiting, Mr. Haiman was responsible for restructuring the sworn hiring process, decreasing the amount of time it took to process candidates while increasing the quality of those officers hired.

Haiman graduated from The Johns Hopkins University with a Master’s Degree in Management through the Police Executive Leadership Program and has his undergraduate degree in mathematics from the University of Iowa and received designation as a Certified Public Management Program through George Washington University, as well as certification in Strategic Project Management. Mr. Haiman is also a graduate of the Naval Postgraduate School Center for Homeland Defense and Security’s Executive Leadership Program. Mr. Haiman received recognition by the International Association of Chiefs of Police in 2020 as a 40 under 40 recipient and the prestigious Gary P. Hayes Award by the Police Executive Research Forum. Mr. Haiman also graduated from the Metropolitan Police Academy and served as a reserve police officer with the Metropolitan Police Department. Mr. Haiman resides with his family in Washington, DC.