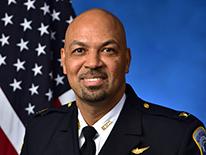 John Branch currently serves as commander of the Seventh Police District. The Seventh District includes much of the Southeast quadrant of the city, including the neighborhoods of Anacostia, Barry Farm, Naylor Gardens and Washington Highlands.

Commander John Branch has almost three decades of experience within the Metropolitan Police Department. He began his career in 1993 in the Fourth District, first as a patrol officer and then as part of the 4D Gun Unit. In March 1997, he moved to the Narcotics and Special Investigation Division (NSID), where he spent two years before he earned a position as a tactical officer with the Emergency Response Team.

In December 2007, he became a helicopter pilot with the Air Support Unit and was trained to pilot the MPD’s Air Bus AStar 350 helicopter.

Branch stayed with the Air Support Unit until he was promoted to the rank of sergeant in February 2010. At that time, he returned to the Fourth District, in charge of the 4D Crime Suppression Team. A short time later, he assumed the responsibility for the 4D Vice Unit as well. He continued as a patrol sergeant in the Fourth District.

In November 2014, Branch served as a sergeant of the Emergency Response Team as well as a Helicopter Pilot in the Special Operations Division. He served in this post for two years, before being promoted to lieutenant in November 2016.

Branch was promoted to captain in 2018, he was assigned to the Sixth District. Each year, the Metropolitan Police Department selects several high crime areas throughout the city and designates them as Summer Crime Prevention Initiative areas (SCPI). Branch was selected as one of six captains to manage an area designated as a SCPI area. Shortly after serving as an SCPI captain in the Sixth District, Branch was reassigned to the Narcotics and Special Investigations Division and was placed in charge of field operations. In January 2021, shortly after the Capitol riot and insurrection, Branch was reassigned to the Special Operations Division and was placed in charge of the Traffic Safety and Special Enforcement Branch, Events/ Presidential Escort Team, and the Planning and Administrative sections.

John Branch was promoted to the rank of commander by Police Chief Robert J. Contee on May 7, 2021.

Branch is a native Washingtonian and graduate of Ballou Senior High School. He was a member of the Track and Field team and earned an athletic scholarship to Howard University.