Suspect Sought in Robbery of an Establishment

Detectives assigned to the Metropolitan Police Department’s Third District are seeking the public’s assistance in attempting to identify and locate a suspect wanted in connection with a Robbery of an establishment that occurred on Wednesday, December 29, 2010 at approximately 7 pm.

A lone male suspect entered a store located in the 1600 block of 7th Street, NW. The suspect passed a note to a cashier and demanded money while stating that he was armed with a gun. The suspect obtained an undetermined amount of money.

The suspect in this case is described as a black male with a slender build and a medium complexion. He is approximately 18-25 years of age, 5’8” to 5’11” in height, and weighs 130 to 170 pounds. The suspect was wearing a black peacoat, blue jeans, white hoodie, and an off-white mask, at the time of the robbery. He was last seen on foot, westbound in the 700 block of Rhode Island, NW.

Anyone who has knowledge of this case, knows the suspect’s identity or sees him should take no action, but should immediately call police at 202-727-9099 or 1-888-919-CRIM [E] – 1-888-919-2746. The Metropolitan Police Department currently offers a reward of up to $10,000 to anyone who provides information that leads to the arrest and conviction of the person or persons responsible for any robbery committed in the District of Columbia.

Additionally, anonymous information may be submitted to DC Crime Solvers at 1-866-411-TIPS and to the department’s TEXT TIP LINE by text messaging 50411. If the information provided by the caller to Crime Solvers leads to an arrest and indictment, that caller will be eligible for a reward of up to $1,000.

Surveillance video captured the person of interest outside the location before this crime occurred. A still picture is attached. 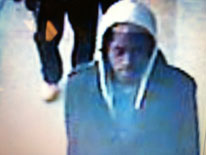