The Metropolitan Police Department/Federal Bureau of Investigation Violent Crimes Task Force is seeking the public’s assistance in identifying and locating a suspect in connection with a bank robbery.

On Wednesday December 26, 2012, at approximately 12:50 pm, an unidentified male entered the SunTrust Bank at 900 17th St., NW.  The subject announced a robbery, de­manded money, and left the bank with an undetermined amount of US currency belonging to the banking establishment.

The subject is described as a white male, 5’8-5’9”, 180-190 lbs., gray hair, mustache, and beard.  His age is described as being in his fifties or older.  He was wearing eyeglasses, red ball cap with logo, golden color coat over a light colored shirt, faded blue jeans and wearing purple latex gloves.

Anyone with information that can assist in identifying this subject is asked to call the police at (202) 727-9099. Additionally, anonymous information may be submitted to the department’s TEXT TIP LINE by text messaging 50411. 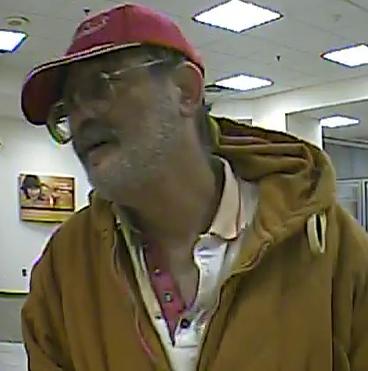