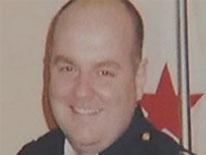 The PSA 302 Orange Hat Patrol would like to take this opportunity to honor the life of Sgt. Gerard W. Burke for his unselfish work as an MPD police officer. Sgt. Burke was a friend to all of those law abiding citizens with whom he came in contact.  It was a joy and pleasure working with Sgt. Gerard W. Burke.

Circumstance:
At approximately 5:08 pm on Thursday, March 23, 2006, off-duty 39-year-old Sergeant Gerard W. Burke Jr., a 16-year-veteran with the Metropolitan Police Department's Third District, was operating his private vehicle southbound on 11th Street, NW. While in the 2800 block of 11th Street, NW, Sergeant Burke was utilizing his cell phone to contact Police Communications and check on a suspected stolen Honda being operated in front of him by a young teenager.

The autopsy conducted by the DC Office of the Chief Medical Examiner indicates that the initial cause of death was due to a ruptured aorta and not the traffic accident.  Chief of Police Charles H. Ramsey has ruled Sergeant Burke's death to be in the performance of duty.

It was later determined that the Honda had been stolen that same day from the 3600 block of New Hampshire Avenue, NW. The vehicle was recovered at approximately 1:22 am, on Friday, March 24, in the 1300 block of Spring Road, NW.