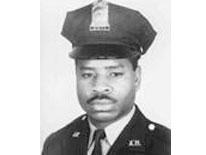 The years have not dulled the pain...


Circumstance:
Officer Ivery and Officer Taylor were working in plain-clothes. They attempted to stop a robbery suspect in the Stanton Park area. Officer Ivery exited an unmarked vehicle, drew his weapon, and approached the suspect. Two uniformed officers pulled up and saw what appeared to them to be a man with a gun in the same area as a reported armed robbery.