In Memory of Officer Steven A. Williams 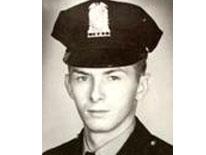 Officer Williams died from six bullet wounds to his head and body.