In Memory of Officer Martin I. Donovan 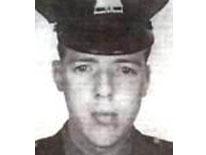 Forty-five years ago today, Marty was taken away from his family in a senseless act of violence as he patrolled his beat in his hometown of DC. We honor Marty today and pray for the safety of all police officers.

I worked with Martin I. Donovan back during 1961 and 1962 in the Second Precinct. He was an excellent officer who always said that he wanted to transfer to the Homicide Branch as soon as he could. Over the years since he was taken from us, I have thought of him often.
Harold F. Titus
—Submitted May 19, 2009


Circumstance:
Officer Donovan was walking a foot beat in the Thomas Circle area, when without warning a mentally disturbed man tackled him. The man tore the officer's gun from its holster and shot the officer in the chest.

Officer Donovan was able to hold onto the suspect until help arrived.

The only excuse the ex-military suspect could give was that the police uniform bugged him.