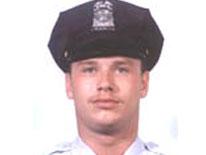 KNOW THE BLUE LINE HAS HELD, YOUR JOB IS DONE.

OTHERS HAVE TAKEN UP WHERE YOU FELL, THE BLUE LINE HAS HELD.

Today you would have been 42 years old, had your life not been cut short 17 years ago. You have touched so many lifes in your short 25 years.

Every night I look at the Big Dipper, I smile and say hello.

You were on my mind, and I just wanted to stop by. We lost our Grandma back at the end of October, but I'm sure you know that by now. I bet she couldn't wait to see your smiling face! We sure do miss it down here. It's hard to believe that it's been 16 years since we lost you, but we've never forgotten you. You're always with us, especially at the holidays. I love you, Jason, and give Grandma and Papaw big hugs from all of us...

Jason,
One of the best times I had was turning the BIG 40 on the same day you turned 25 -- at the Orioles game. That was 16 years ago. Happy Birthday my friend, and thanks for looking down on all of us from the Big Dipper!

Jason,
Every year around the holidays I start thinking about you and that awful night.  I will never forget. You were the first of many to leave us, but for me, you leaving us will always be the saddest. See you at the "Big Dipper."

First Gandels sub is on me next time we meet.

Jason,
It was 14 years ago today that you were taken away from us. We will never forget the impact that you have made on so many. It is written on the wall of the Police Memorial, its not how you died that made you a hero, its how you lived...that is so true of your life.

It was a pleasure knowing and serving with you at MPD 1D-1. And although it has been 14 years since the moment we lost you. Your memory lives on in our hearts and minds. We wish all those you loved continued strength & faith.

Jason,
I knew you when I was only 10 years old. You were a hero and I will never forget you. I wish your family the best!

You brought such joy not only to your family but everyone around you. You took such joy in making others happy and you were so good at it. I read all the nice things that others have written about you and it makes me so proud to know that others loved you and thought so highly of you. Your family misses you more than anyone could ever imagine, but we find comfort in knowing that we will be with you again.

Take care my son and know that you are and forever will be with me always.

We miss you Jason.

December 30, 1993 we will never forget you and the sacrifice you made. Just 25 years old and you touched so many lifes.

You were like a big brother to me. I love and miss you so much. We will meet again.

Several times throughout the year I think of you and say a prayer. But I think of you especially at Christmas time. I could never forget that night you left and hope you have found peace.

Jason will never be forgotten by those who knew him. I was one of the lucky ones who did.

Jason, it has been 11 years since that horrible evening on December
30, 1993. You will never be forgotten.

Every year around this time, I think of what happened on that night. We all miss you, and will never let your memory fade. You took a piece of our hearts with you, and, at the same time, you made us stronger.

Take care Jason. We miss you.

˜ A friend from the First District Substation
Submitted November 10, 2004

Today, April 29th, would have been Jason's 33rd birthday. Happy Birthday Jason...Meet you at the Big Dipper.

On December 30, 2000, it will be seven years since Jason was killed. Jason was a good son, husband, brother, friend and fellow officer. His mission to bring offenders to justice still goes on. Let's never forget.

Officer White and his partner, Officer Harris, were attempting to question a possible wanted suspect, when suddenly the suspect drew a .40 caliber handgun and shot White in the chest. The suspect then shot Officer Harris and turned back to Officer White shooting him five times in the head.

Officer White died on the scene, and Officer Harris survived.