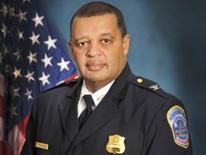 Commander Reese’s law enforcement career began in 1982 with the City of Gary, Indiana police department where he was assigned to patrol and traffic duties.  Commander Reese began his career with the Metropolitan Police Department on September 16, 1985.  After completing the training requirements with the Metropolitan Police Department, he was assigned to the First District.  In the First District he served 3 years as a foot beat, motorcycle beat and scout car officer.  In October of 1986 he was nominated and selected as “Cop’s Cop” for capturing a violent sexual predator.

His duties at the Third District were all patrol related.  In June of 1998, he was given a collateral duty as commander of the newly created Prostitution Enforcement Unit.  The successful performance of the unit was noted by the Chief of Police.  Near the end of his tour of duty on December 7, 1998, his birthday, Reese gave himself a nice birthday present by capturing an armed drug dealer, an action also noted by the Chief of Police.

In January 1999, the Metropolitan Police Department decentralized the majority of the Criminal Investigations Division to include the Homicide Branch and Sex Branch. As a lieutenant he was selected as the commander for the Fifth District Detective’s office and assisted the agency with embarking of the new investigative strategy.  The Fifth District’s Detective office was now responsible for the investigation of property crimes as well as all violent crimes to include homicides and sexual assaults.

In September of 2007, Commander Reese was transferred to the Internal Affairs Bureau, where he was the commanding officer of the Forced Investigation Team.  The bulk of Commander Reese’s career has been within investigative units.

On January 20, 2008, Commander Reese was transferred and promoted to the rank of Inspector where he served as the Director of the School Security Division.

On January 7, 2011, Commander Reese was promoted to the rank of Commander and transferred to the Second District.

Commander Reese has attained a Bachelor of Science Degree from Indiana State University, Master Degrees from the University of the District of Columbia and The Johns Hopkins University.  He is a graduate of the FBI National Academy and currently serves as the Past President on the DC Alumni Chapter Executive Board of the FBI National Academy Associates.  Commander Reese has attended numerous training from federal and local agencies as well as creating partnerships with major corporations to investigate property crimes.  Commander Reese is in the final phase of the Executive Leadership Program hosted by the Center for Homeland Defense at the Navy Post Graduate School in Monterey, California.