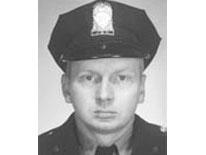 Circumstance:
On May 25, 1971, two suspects robbed the Savings and Loan on MacArthur Blvd., NW, and fled on foot. Officers Sigmon and Swartz were in the rear of the bank and gave chase to the suspects. As the suspects ran up a steep flight of stairs, the officers engaged them in a gunfight. Officer Sigmon was able to wound one suspect three times, before the other suspect, Lawrence Caldwell, shot him once with a .45 caliber handgun.

Officer Sigmon was shot in the heart and died on the scene.