In Memory of Officer Gail A. Cobb 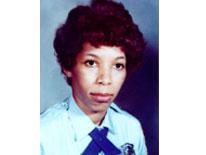 Circumstance:
Officer Cobb was walking a footbeat, when a citizen reported to her that a man with a gun just ran into the parking garage. The man, a robbery suspect, was running from other officers.

Officer Cobb confronted the man and made him place his hands on the wall. As Officer Cobb attempted to use her radio to call for back up, the suspect drew a handgun and shot her once. The bullet hit her arm and entered her heart.

Officer Cobb was the first female officer to be killled in the line of duty for the Metropolitan Police Department.