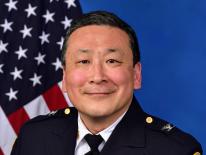 Commander Han Kim began his career as a recruit with the Metropolitan Police Department in 2004. He spent his first two years in the First District working as a patrol officer and supporting the Theft from Auto Unit. In 2007, Kim was assigned to the Third District as an officer working in the Robbery Tactical Unit and Crime Suppression unit. In 2011, he was the recipient of the Crime Suppression Team of the Year award.

When Commander Kim was promoted to Sergeant in December 2012, he moved to the Fourth District. As a Patrol Sergeant in the Fourth District Substation, Kim was responsible for the daily activities of officers and patrol functions. In October 2014, Kim was assigned as a sergeant in the Patrol Services and School Safety Bureau. Almost a year later, in September 2015, Kim moved to the Internal Affairs Division.

Kim was promoted to Lieutenant in April 2016, and continued his post in the Internal Affairs Bureau. There, he managed the team responsible for serious use of force and other serious incidents before moving to the Court Liaison Branch in December 2017. The Court Liaison Division serves as the liaison agent for MPD- responsible for maintaining communication with all key stakeholders in the criminal justice system.

In October 2018, Kim returned to the Third District, now as a Captain. In 2019, he successfully managed the Fall Crime Initiative (FCI), which resulted in the significant reduction of violent and property crimes in the areas of the FCI. He moved to a new post in the Narcotics and Special Investigations Division in May 2020, where he reported directly to the commander of NSID, keeping them well informed of the unit operations. On May 7, 2021, Han Kim was promoted to Commander by MPD Chief Robert Contee.