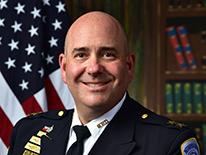 Assistant Chief Stuart Emerman has 24 years of police service with the Metropolitan Police Department. He began his career as a recruit officer in April of 1998 and rose through the ranks, making sergeant in 2004, lieutenant in 2007, captain in October 2014, inspector in February 2015, and commander in 2016. Throughout his career, Assistant Chief Emerman has served in a variety of assignments, including the Sixth District as a patrol officer and the Third District as a sergeant. Additionally, as a lieutenant, he worked as a patrol manager in the Third and Sixth Districts, the Special Operations Division, and the Criminal Investigations Division. Upon his promotion to captain, he was transferred to the Seventh District where he was assigned to patrol operations.
While working as a lieutenant in the Special Operations Division, Emerman served as the commanding officer of the Major Crash Investigations Unit, where he was responsible for the management of the detectives that investigated accidents involving critical injuries and fatalities. He was then assigned as the commanding officer of the Special Events Planning Unit, where he was responsible for overseeing the coordination and operations of MPD units at demonstrations, parades, festivals, and dignitary motorcades. In addition, he assisted with the planning and coordination of 2009 Presidential Inauguration. As a lieutenant in the Criminal Investigations Division, Emerman was assigned to the First District Detective’s Unit, where he oversaw investigations involving assaults, robbery, burglary, theft, among other crimes.
Emerman served as the commander of the Third District from January 2016 through May 2021. Prior to that, he was the commanding officer of the Tactical Information Division. As the commanding officer of the unit, he was responsible for overseeing criminal intelligence, the Joint Terrorism Task Force Unit, the Department’s Closed Circuit Television (CCTV), License Plate Recognition and gunshot detection programs, the Alcohol Enforcement operations, the Command Information Center, and the Joint Operations Command Center.
Before being promoted to his current position, Emerman served as the Patrol Chief of Patrol Services North (PSN), which includes the Second, Third, Fourth and Fifth Police Districts. He was named Assistant Chief by Police Chief Robert Contee on May 7, 2021.
Assistant Chief Emerman is a graduate of the University of Maryland College Park, where he received a Bachelor of Arts Degree; he is also a graduate of the Executive Leaders Program (ELP) of the Naval Postgraduate School’s Center for Homeland Defense and Security. Additionally, Emerman has completed the FBI-LEEDA Command Leadership Institute training. Assistant Chief Emerman has previously been certified as a Level A Haz-Mat Technician. He has also several certifications in Chemical, Biological, Radiological, Nuclear, and Explosive response. In 2015, Emerman was recognized as the MPD Inspector of the Year.
Contact Email:
[email protected]
Twitter
Facebook
Mobile
Maps
Webcasts
RSS
Data
Subscribe
END_OF_DOCUMENT_TOKEN_TO_BE_REPLACED