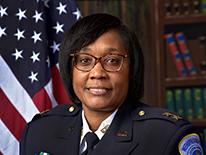 Prior to leading the YFEB, Wheeler-Taylor served currently as the commander of the Youth and Family Services Division (YFSD) within the Metropolitan Police Department. The YFSD is the division responsible for investigating child abuse and neglect, child sexual abuse and exploitation (including child pornography and prostitution), juvenile missing persons and parental kidnapping, and persons in need of supervision. She was appointed to his position by Chief Robert J. Contee III on January 4, 2021.

Commander Wheeler-Taylor began her career with the Metropolitan Police Department in May 1991, when she graduated from the Academy and was assigned to the First Police District. When she was promoted to the rank of sergeant in December 1996, she moved to the Second Police District. During her time at the Second District, Wheeler-Taylor served as a midnight support sergeant, receiving the 1997 2D Patrol Sergeant of the Year award.

In December 2000, Pamela Wheeler-Taylor was promoted to lieutenant. The was first assigned to the Fifth District as commander of Patrol Service Area (PSA) 501, and later PSA 508. In 2005, Wheeler-Taylor moved to the First District, serving as a Focus Mission Unit lieutenant responsible for the supervision of various vice investigations, management of confidential funds, and execution of search and arrest warrants.

In addition to her patrol experiences as a lieutenant, Wheeler-Taylor was assigned to the Office of Human Services as a Medical Claims Appeals Officer, and served as the acting deputy director of the Medical Services Section served from February 2007-June 2009. She also managed administrative matters in both the Human Resources Management Division (HRMD) and in Patrol Services South (PSS) before being promoted to captain in 2017.

As captain, Wheeler-Taylor supervised the Patrol Sector that includes PSAs 401, 402, and 406 until October 2018, when she was assigned as the deputy director in charge of the Disciplinary Review Division. She served as captain in the Internal Affairs Division from April 2019 until January 2021, when she was promoted to commander of the Youth and Family Services Division (YFSD).