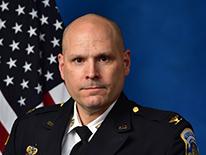 Robert Glover began his career with the Metropolitan Police Department as a recruit in 1994. His first assignment upon graduating was as a patrol officer in the First District. Four years later, he was promoted to sergeant and in the Fifth District.

He was promoted again to lieutenant in 2000, and, served in a number of posts at that rank, including PSA supervisor, recruit training, and criminal investigations in the Third District and Homicide Branch. In 2008, Glover was assigned to the Special Operation Division, which includes Domestic Security Operations Unit; Explosive Ordnance Disposal Unit; Emergency Response Team; Special Events Section; and Planning Section

Commander Glover graduated from Pennsylvania State University in University Park, PA, in 1993 with a BS in Administration of Justice. He has numerous certifications and trainings, from notable agencies such as the Federal Bureau of Investigation; the US Secret Service; The Anti-Defamation League and the Department of Homeland Security.

Robert Glover retired from the Metropolitan Police Department in May 2022.