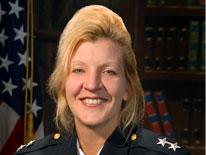 Diane Groomes retired from the Metropolitan Police Department in April 2017.
Diane Groomes served as the Assistant Chief of the Patrol Services and School Safety Bureau (PSSSB) at the Metropolitan Police Department (MPD) where she oversaw all patrol units from the First to Seventh Districts, Special Liaison Division, and school safety in the District of Columbia. She was appointed on September 23, 2007 by Chief of Police Cathy L. Lanier to the position.
Since assuming the expansive role of Assistant Chief of Patrol Services and School Safety Bureau, Assistant Chief Groomes has implemented a variety of different programs, including the Full Stride Program that was organized in 2008. The idea behind this initiative was for patrol officers to regularly step out of their cars and take to the streets or sidewalks to promote public safety, while at the same time getting to know residents and business owners in the neighborhood. With this approach, she hopes officers are able to build positive relationships with residents in the communities they serve, and in turn, better understand the city’s public safety concerns.
In addition, under Assistant Chief Groomes’ leadership, the Full Stride program has expanded to enhance the mountain bike program in 2015 to facilitate the face-to-face community interaction that is expected of officers in patrol services, and hosting community citywide rides. One of her significant achievements includes expanding School Resource Officers (SROs) to charter schools by using the “cluster model” where SROs are deployed to support multiple schools in geographical areas and are a “resource” to all schools. It has now been adapted as a national model since its expansion in DC. Currently, she is overseeing the “See Someone, Say Something” campaign at MPD.
Assistant Chief Groomes first joined the Metropolitan Police Department in October 1990 and quickly moved up the ranks. Out of the academy, she was first assigned to the Fourth District where she was designated as the first Patrol Officer First Class when the program was initiated in 1994. In her role as a Sergeant assigned to the Fifth District, Groomes was instrumental in organizing the community and develop a model community policing program in 1997 when the PSA model was created. She was also part of a team (PSA 510) that received top honors for the biggest crime reduction in the city. The City Council passed a Proclamation due to the 510’s crime fighting and community organization efforts under her leadership.
In September 2000, Groomes was promoted to Lieutenant and assigned to the Third District where she was tasked with managing the Powershift unit to deal with the violent crime issues surrounding the nightclub zones. During her tenure, she designed and headed up the successful Street Crime unit, which focused on persistent crime and disorder problems in the Northwest community. And after being promoted to Inspector, she helped design and implement a number of innovative programs, including the community email group, expansion of neighborhood patrols, and the DC Fashion Idol program for at-risk young women, which has now been expanded and adopted by the Greater Washington Boys and Girls Club. Diane Groomes was promoted to Commander in August 2005, by Chief Charles Ramsey and assigned to the First District, where she served a diverse business and residential community before her appointment to Assistant Chief.
Assistant Chief Diane Groomes holds a bachelor’s degree in criminology from Indiana University of Pennsylvania. She is a graduate of the Senior Management Institute for Police, Boston College in 2005, and also attended the ADL counter-terrorism training in Israel. More recently, she completed her leadership certificates from the Business Schools of both Cambridge University of England and Harvard, and became a fellow with the International Women’s Fellowship program in 2012.
When she’s not fighting crime and deploying  MPD patrol officers on the streets of DC to ensure resident’s safety, she is traveling the world--from the pyramids in Egypt, to a safari in Africa, and just recently back from the warm beaches of Florida. Assistant Chief Groomes is also known for attempting to learn the latest dance moves and engaging with kids in popular dances. Outside of these ambitions, she currently sits on the board of the Greater Washington Boys and Girls Club, the Black and Missing Foundation, and is a representative for the Interagency Council on Homelessness.
Contact Email:
[email protected]
Twitter
Facebook
Mobile
Maps
Webcasts
RSS
Data
Subscribe
END_OF_DOCUMENT_TOKEN_TO_BE_REPLACED